JOSEF BOLF: Do you think there is a difference in the way your work is received in the Czech Republic and abroad? If so, what is the nature of this difference?
JIŘÍ KOVANDA: I think there is a difference. For instance, in other countries my work from the seventies and eighties is often interpreted firstandforemostinlight of the political situation in what was then Czechoslovakia. It is perceived as a form of resistance or an expression of the freedom of the individual within a totalitarian society. Whereas in this country it seems to me that there is a greater understanding of my basic premises, possibly because we naturally have a better knowledge of the local situation. It goes without saying that I don’t want to avoid political overtones. However, I have always been more interested in reaching out to something more fundamental, something common to all people, regardless of where they live. I think that Czech art has always been more sensuous and emotional, and not as analytical and intellectual as in other countries.

JB: I would also like to know what influence the fact you work as a lecturer has on your work, and whether you feel that, perhaps not in an organised way, you are processing impulses which young people are inadvertently providing you?
JK: My work as a lecturer is very important at present, perhaps the most important thing to me. If you lose contact with what is being created right now, you can’t remain “alive” and express yourself in a language which is comprehensible to the context in which you find yourself. Young people have different attitudes to life, different perspectives, and of course they possess an energy which I can draw on as a kind of remuneration for what, hopefully, I offer them.

JB:. What is your relationship to surrealism?

JK: Surrealism is crucial for me. Not only because it represents the very beginnings of my interest in art itself. But also because, however much people speak of my work in terms of conceptual or minimalistic art, the influence of surrealism is just as important. I have always been interested in intuitive procedures arising from unconscious sources, the play of associations and unexpected encounters. To this day I admire the early work of most of the surrealists from the twenties and beginning of the thirties, especially the early paintings by Joan Miro, Yves Tanguy, René Magritte, Salvadore Dal, and later the works of Victor Brauner for instance. And in this country Jindřich Štyrský and Toyen of course.

EVA KOŤÁTKOVÁ: When we saw each other recently in Berlin you said that when you went to an exhibition you weren’t interested in things which were close to the way you think. As a joke we spoke about the possibility of your trying out surrealism as a way of working, something which would startle a lot of people. I’m not assuming that this is what happened upon your return from Berlin. However, would it be true to say that you are in a phase right now in which you are thinking about changing the way you work and moving in another direction?

JK: It’s interesting that we find our selvesback talking about surrealism. Given what I said above, there is no gaping, impassable chasm between my work and surrealism. This shouldn’t startle anyone. I mean, even our joint installation last year in Futura was more “surrealist” than “conceptualist” …
I am not thinking in terms of a change or movement in another direction. I have never thought about things in that way. I have always tended to allow things to come to me rather than planning them in advance. But perhaps from a wider perspective I am aware of all sources and connections, although the truth is that these days I findmyselfdrawnto more romantic or lyrical styles.

EK: You are often asked to put on exhibitions of older work or remakes of your older events. How do you work at present when you are asked to put together an exhibition at which you would like to show your new work? Do you have things prepared in the form of ideas or even finishedworks, or does everything begin at the moment you start communicating with the curator, looking for the right space, etc.? Is this the moment you start working on something new?
JK: I use both procedures. If I have to come up with new items for an exhibition, I try first of all to react to the space in question, to allow myself to be influenced by the concrete situation and create something genuinely new which would not occur to me elsewhere. If I find myself floundering,I bring out my notebook and discuss with the curator what would be best to work on.
Most of all I like ideas that originated unwittingly and which surprise me. For instance, at a recent exhibition in Milan I had ideas for two installations in the gallery. However, in the end I used a mass of wrapping materials, plastic foam and paper, which the person who was installing the exhibition removed from one of the walls. It was quite simply a “sculpture”. Finally I also learned that this person was an artist …

EK: During a recent visit by Markéta Othová I saw her beautiful exercise book, full of ideas, cuttings and photographs, which are always grouped in a certain order. I know that you also have similarly neat outlines or notes, some going back quite far in time. Do you find yourself drawing on these ideas after several years have elapsed? Are there any ideas which you would still like to realise given the opportunity?
JK: Hmm, my drafts are not that neat. But leaving that aside, I have already mentioned my notebook. This contains everything important that precedes realisation, everything which is not only created in situ … Several times I have used an idea after a fairly long time has elapsed, maybe even several years. Sometimes an idea which doesn’t seem to have much going for it to begin with turns out to be the right solution with the passing of time. Everything is transformed over time –make sure you keep hold of everything!
And the ideas I would like to realise are a case in point. You mentioned Markéta Othová – for two years I have had a project in my head which I would like to work on with her. We have even spoken about it, though so far nothing has come of it. Perhaps one day we will realise it.

EK: You are known for the fact that you sometimes arrive at a gallery a few hours before you have a private viewing and take out a whole load of new items from your rucksack and then add things belonging to the gallery or its surroundings (well, something of the sort happened in the case of a few exhibitions). I know that you have often spoken of the importance of making do with what is available. Even so I would like to ask what led you to this position, and whether there was a certain type of development involved, for instance a trend towards an ever greater paring down of resources.
JK: Making do with what you have at your disposal, not thinking up new things unnecessarily, and not plugging away at things for the sake of it is a very beneficial “strategy”. This is true in general and doesn’t apply only to art. And art has to be for something … Laziness also plays a role, but not in a bad sense. I am thinking more of a positive or even constructive laziness. Often, the best solution to a problem would be to sit in a forest on a tree stump and not do anything at all …

EK: You don’t have a studio. Have some of your events taken place within a domestic environment, or is this more a case of a domestic studio in the traditional sense of the word, where you create drawings, paintings, collages?
JK: Thirty years ago I did something which I called “White String at Home”. It involved a white string, which was stretched from wall to wall roughly in the middle of my room. It was placed at such a height that whenever I walked through the room I had to stoop right down. The event lasted two weeks and there are two photographs of it …

JAN ŠERÝCH: When you and I were editing the catalogue for the exhibition Cargo, you often got annoyed while working. You were forever exclaiming “Oh bugger it!”. I couldn’t help thinking that the creative process must be a painful experience for you. On the other hand I have the feeling that several works of yours from the nineties can be understood through the lens of your work as part-time graphic designer. Did you ever enjoy that work and were there any ambitious associated with it?
JK:Was I really annoyed so often? Surely not … Though the truth is that activities I have long included under the term “work” are often pretty tiresome. Recently a colleague of mine said that he found painting pictures hard work. I replied that if ever I felt the same I would give up painting. For me art must always be a kind of hobby, a form of entertainment. Anything which, for whatever reason, I am forced to do, even if it is the most pleasant thing, soon becomes tedious.
Basically, with the exception of certain catalogues, I worked as a graphic designer out of necessity, even though I have to admit I quite enjoyed the work and it certainly impacted on certain other areas of life, as you mentioned. I enjoyed it when there was no rush. But I wasn’t the best at it, I am aware of that. I was most satisfied doing the typesetting. I didn’t have to think about anything, I simply put on some music and got to work with the mouse …

JŠ: I’m sure I’m not the first person to ask you this, but I’m going to anyway. In the documentary An Attempt at Meeting a Girl you blacked out the second sentence, quite ostentatiously it would seem. (The firstreads“Iinvited friends to look at how I try to meet a girl.”) What came next for heaven’s sake?
JK: There were no secrets involved. The second sentence simply said something along the lines of how I had not met or contacted a girl, how I wasn’t attracted to any of them … I was probably simply embarrassed. However, in the end I realised that I hadn’t described how things had worked out in the case of other events too, and that this isn’t the important thing. The important thing is the situation itself, the fact that it genuinely took place. The significance of the event lies in this fact, regardless of how things ended up.

The painter Josef Bolf (1971) and the conceptual artists Eva Koťátková (1982) and Jan Šerých (1972) studied at the Academy of Fine Arts in Prague, where the artist Jiří Kovanda (1953) has been a lecturer since 1995 as assistant to the Vladimír Skrepl Painting School. Since 2008 he has headed his own Performance Media Studio at the Faculty of Arts and Design at the Jan Evangelista Purkyně University in Ústí nad Labem.

Window in the Centre, 2009, photography, photo: archive of the artist. 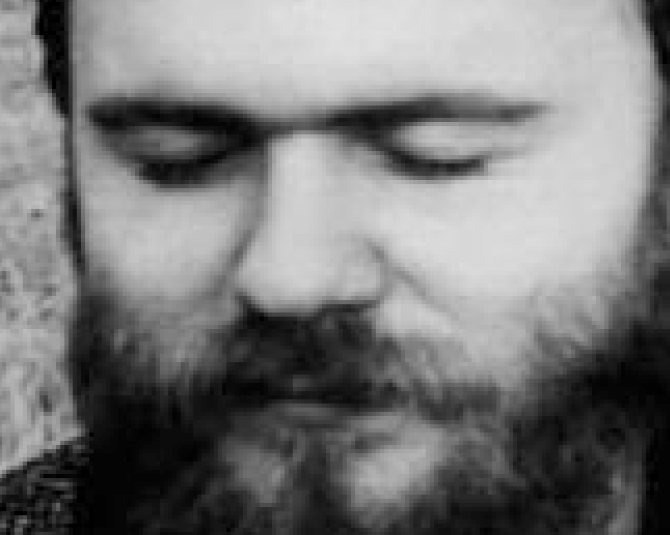