Mark Ther (born 197?) is an important figure on the Czech art scene who is more and more being associated with the medium of video. Since studying at Prague’s Academy of Fine Arts (1998-2005) he has participated at important domestic and foreign contemporary art exhibitions. Over time his videos have gradually moved closer to the technique of film, though from the start were imbued with their own style. They are not long, and most of them are without any clear point or conclusions, though they feature characteristically long, simple takes. An integral part of these ambiguous, bewildering and formally refined videos is the music, which as one of the film resources significantlyre in forces the over all atmosphere of the stories.

Mark Ther is an artist who carefully nurtures his profile and appears in his own videos. Even though he rejects any kind of label and disclaims any engagement on the part of his work, his compositions are engaged from the first momen to ftheir public presentation. Within the Czech environment they sometimes evoke contrasting reactions. A typical trend in his work is a certain type of cynicism, emptiness, and the resolve to demolish all social taboos, which could be deemed the points of contact between Mark Ther and the pioneers of these positions, such as Andy Warhol and Jeff Koons. Ther focuses on subjects dealing with the themes of homosexuality and gender issues, and in his “bloody” videos he touches on the issue of the degenerated sensibility of people. His topics also include the still unclear relationship between Czechs and Germans, into which historical developments, especially the expulsion of Sudeten Germany from the Czech border region at the end of the 2nd World War, intervened with such brutality.
Mark Ther unquestionably belongs to the most important creators of contemporary Czech video art. His multilayered, generalising subjects and filmic videos in foreign language versions or with subtitles, have the ambition to speak to a wide artistic public. 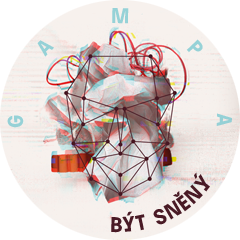