Pavla Sceranková (born 1980 in Košice) began to make a name for herself on the young art scene while still studying at the Academy of Fine Arts in Prague, which she graduated from in 2006. In the same year one of her first independent exhibitions was held in the Jelení Gallery. Though this is a small, independent gallery, to find one selfon its list of exhibitions is a prestigious matter for an artist. The calibre of Pavla Sceranková’s work was confirmed when she won the Václav Chad prize for the last Zlín Young Artists’ Salon in 2009 (the salon is an exhibition of the youngest generation of Czech and Slovak artists aged up to 30 and the prize is awarded by a specialist jury for the best presented work). Zlín was also the venue for a presentation of Sceranková’s sculpture Puzzle (2009), the principle of which is a children’s puzzle blown up into large proportions. The artist retained the basis of the puzzle, which consists of fitting together forms of various shapes and sizes. However, in Sceranková’s hands these forms are much larger than the apertures into which they are supposed to fit. The result isthat the puzzle cannot be solved physically, although despite its disproportionate size it is possible to find a solution of sorts if looked at from the right angle. The motif of play is present in other sculptures by Pavla Sceranková, of which the best are those containing an element of movement. One example of this is the site-specific installation which Sceranková exhibited in Benzinka (exhibition premises in a derelict petrol station) entitled Open Closed (2008), or the sculptures Go Away Come Back (2009) and I Am Going (2009). As in the case of Puzzle the basis of the last exhibit is a common, simple shape, blown up out of proportion – in this case a cotton reel which is large enough for a person to fit inside and move around the room. However, all her works up till now have been superseded by her current work entitled Report of the Neocortical (2011), which she created for the project Start-up II, which presents the work of young artists in the City Gallery Prague. The title refers to human dreaming: the neocortex is the name for that part of the cerebral cortex in which the REM phase of sleep takes place. Pavla Sceranková combined a simple and expressive sculpture with a video which she projected onto the roof of the gallery. Similarly to her previous projects, so with “the materialisation of a dream”, as curator Sandra Baborovská calls Report of the Neocortical, an interactive element is present: visitors can touch the subject and rotate it. Works by Pavla Sceranková are concise, with clean shapes and created from simple materials (she often uses plywood in its original state). This makes her works accessible and easy to understand. 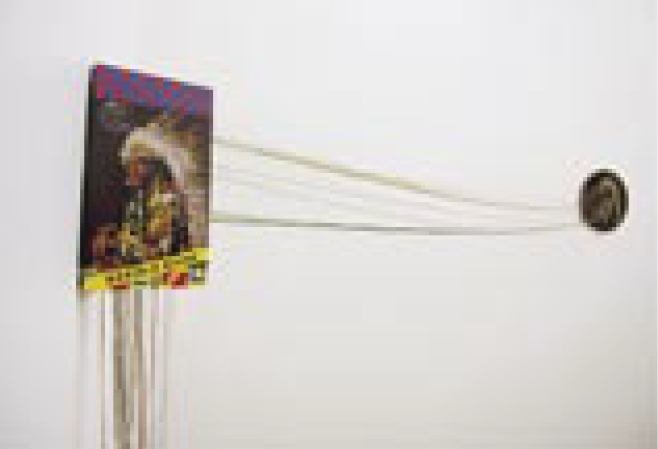