Petra Feriancová (born 1977 in Bratislava) uses video, photography, texts, installations and audio recordings to work with material accumulated in her private life. She contextualises civil video recordings, documentary photographs from archives of those close to her, magazine clippings and love letters in a system with personal rules, in which the identity of people and places doesn’t matter, but the relations between them, their mingling, disappearance and emergence do.
Her work often possesses the character of collages, of archives in which new systems are determined by storing and rearranging various materials. She often returns to her work and records, which originally were not created with the intention of becoming artworks, after a time interval of several years. Thus she can work with it from the position of an observer who chooses the given material with a sense of detachment. She interprets the residue, the remains of her work, often, in her view, the material that is visually unattractive and useless, yet not thrown away: she gives it the right to a new existence.
A typical strategy is the staging of information that may at first glance appear to be random. It’s as though many of the works were created incidentally, with another design. She therefore does not avoid imperfections in photography, an apparently relaxed approach to technical aspects or to less-expensive materials. This apparent negligence is balanced out by her precise, formally perfect installation. We can interpret this approach as intelligent play with the possibilities of perception and representation, thus negating the apparent randomness and emphasising an awareness for each decision.
Although her works are created as part of a communication process, and other people are involved in carrying them out, some works have the form of a dialogue distinguished by a closing within, a certain closed communicativeness with the viewer by which there is created tension and a concealed plea to patiently, analyze her multi-layered work.
She chooses post-production as a creative method that reduces the presentation of the original material that she herself created. A frequent motif in her work is a kind of unattainability of the objective, negation, unfeasibility that links her works such as Sewing Machine and Super 8, (2010), in which there is a negation of story and image representation (the projection of a string running on a film reel, cutatacerta in point).
Petra Feriancová in 2010 received the Oskár Čepán Award, she is represented by the Jiří Švestka Gallery, Prague/Berlin and the amt_project, Bratislava.

PETRA FERIANCOVÁ, With My Mom, With My Dad, With My Granpa, The Supper By Us, With My Sisters, My Daughter, With My Husband, With My Nephew, 2010, courtesy amt_ project, photo: Marko Horban. 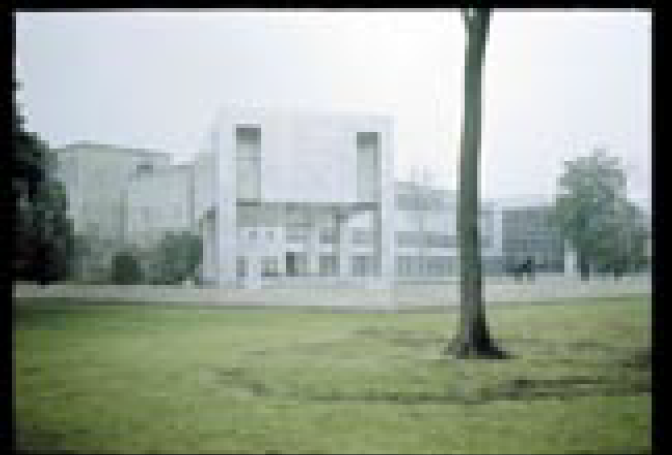