The Intourist-Zakarpattya Hotel1 looms over Uzhhorod, Ukraine’s westernmost city. Anchoring Cyril and Methodius Square, the brutalist behemoth built in 1979 neighbors an Orthodox Cathedral colloquially termed the ‘Taj Mahal’ and a café named after the coffee-producing capital of Colombia. Twenty minutes’ walk from the city’s historic core, the fourteen-story complex exists in its own orbit. There is a billiard hall, a lounge, a green-paneled restaurant, a burned-out discotheque, a brewery-cum-greenhouse, a boxing gym, and a winged bear, to name but a few assets in various states of permanence. At the opposite end of the former Soviet Union is its identical concrete twin – the Intourist-Khabarovsk Hotel, located in the Russian Far Eastern city of the same name.

Today, the municipally-owned lodging’s primary residents are students from India and Sub-Saharan Africa enrolled in the city’s medical university, Ukrainian security personnel rotating through posts at the border with Slovakia five kilometers away and the crossing to Hungary twenty kilometers further, and an ever-changing roster of contemporary artists. Crocs™ and camo are equally prevalent. Only one elevator is in operation, so there is ample opportunity to make eye contact with those who sleep under the same roof as you and catch the chorus of the song they are listening to.

The artists arrive via the framework of Sorry, No Rooms Available2, a residency center housed in Room 1420 – the only habitable quarters on the top floor’s east wing. The room is just that, comprising a twin bed, a pull-out sofa, a desk, a lamp, a Frankfurt am Main transit map taped to the wall above the toilet, a rice cooker, extension cords, blankets, a space heater that survived a small fire, and a flock of pigeons prone to pecking at the window. The apology in its name may make it seem unaccommodating, but, since its inception in 2016, the residency has established a venerable reputation in the Ukrainian cultural landscape, owing largely to the intricacies of the setting hinted at above and the enthusiasm of its organizer, Petro Ryaska.

A standout figure in Transcarpathian neo-nonconformism, Ryaska is an interdisciplinary artist whose practice is grounded in performance, painting, and place-making. His decision to initiate Sorry, No Rooms Available was influenced by the Intourist-Zakarpattya administration’s policy of renting rooms for artists to use as studios for a price of one canvas (painting) per month. In planning the residency program, Ryaska, who is assisted by Attila Hazhlinsky, prioritizes commitment over cachet, transcending hierarchies of who’s hot and who’s not. Some artists participate once. Others, like Yaroslav Futymskyi, return regularly, turning the hotel into a home.

The confluence of abundant multiculturalism on the ground and regional remoteness fueled the rise of Sorry, No Rooms Available. The remoteness is real, yet artificial. Uzhhorod has plenty of neighbors and it is unencumbered by 21st century Iron Curtains in the form of insurmountable language barriers or visa restrictions. The city, which has a population of approximately 110,000, is two hours by bus from Košice, but, apart from a 2017 swap facilitated by K.A.I.R. and Cublo Art Center, opportunities for creative connection are minimal. A similar story holds for Uzhhorod and Debrecen, although the relationship between Ukraine and Hungary is much more complicated than that between Ukraine and Slovakia.

The biggest cities in Slovakia and Hungary are two or more times closer to Uzhhorod than Uzhhorod is to Ukraine’s capital. Uzhhorod is twelve hours on the fast train and fifteen and a half hours on the slow train from Kyiv, where the country’s contemporary art discourse is centralized. Owing to this, domestic travels to Sorry, No Rooms Available assume the air of a pilgrimage, and anecdotes of residency activity have a tendency to become augmented as they are once, twice, and three times removed from the source.

Such a conversation with the Kharkiv-born, Kyiv-based photographer Polina Karpova prompted my initial visit to Uzhhorod last fall. Struck by what I encountered (and craving more of the bograch served in Egan, an excellent pub run by the parents of the PinchukArtCentre Prize nominee Alina Sokolova), I returned this February for a residency with the artist Anton Hryhorenko, who works with slang and pseudo-readymades. Throughout our conversations with Ryaska about the exhibition we were mounting in the hallway attached to a former KGB agent’s quarters, Ryaska’s go-to reply was always “why not?” This response established a tone of limitless possibility. It simultaneously urged us to find affirmation within ourselves for ideas as-yet-unenacted.

Hryhorenko and I sought for our work to absorb the lore of the hotel and the semi-fiction of the era it represents, and the regimes it has existed through. It is a strategy frequently deployed by Sorry, No Rooms Available residents – with snow (Stas Turina’s In this case, I outline the space by snowmen), in fluorescent text (Patrycja Plich’s Higher Order Understatements), and through analog tapes (Raivis Kapilinskis’s Secret Handshake).

One of the most ambitious projects in this manner was Oleksandr Yeltsin’s Painting for the Hotel, which was staged in October 2019. For this total installation, Yeltsin created a series of camera obscuras across the length of the residency wing. Distilling soft-edged subtlety, the obscuras approached an essence while encrypting that essence through inversion. The directionality in Yeltsin’s title (for, not with/by/at) underscores his deference to the atmosphere. The final aspect of the work was a whiteout. Room 1420 was wrapped in white bed linen, becoming a beacon of baptismal blankness. 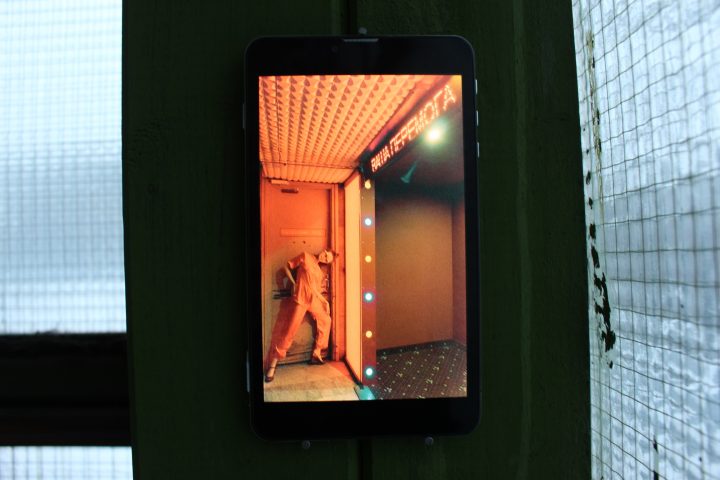 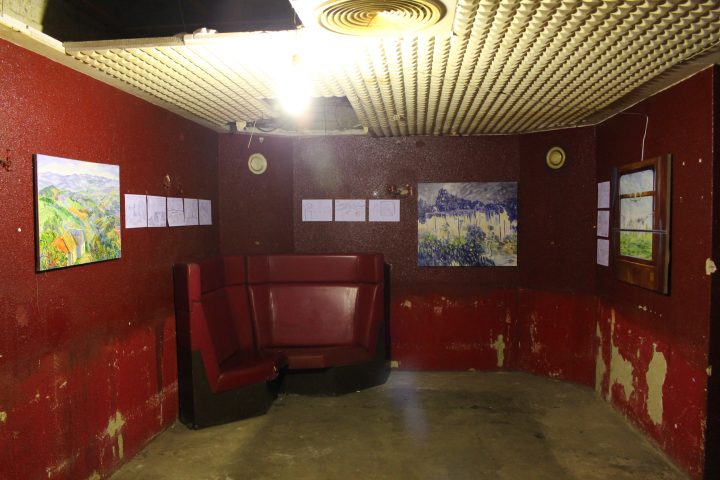 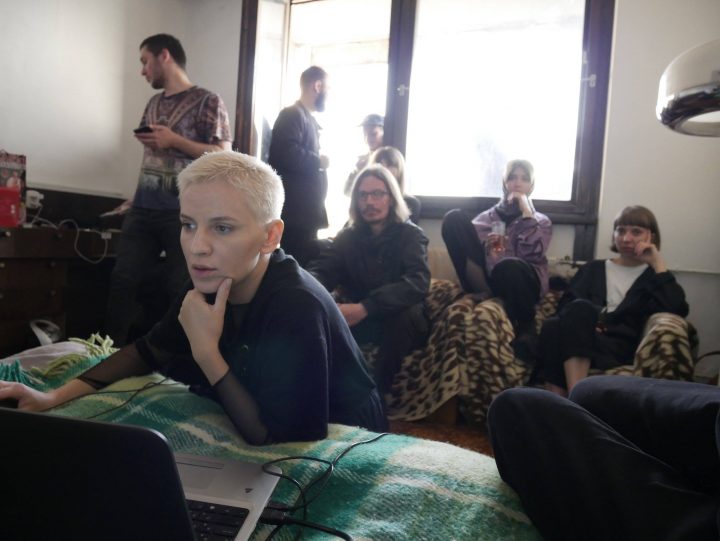 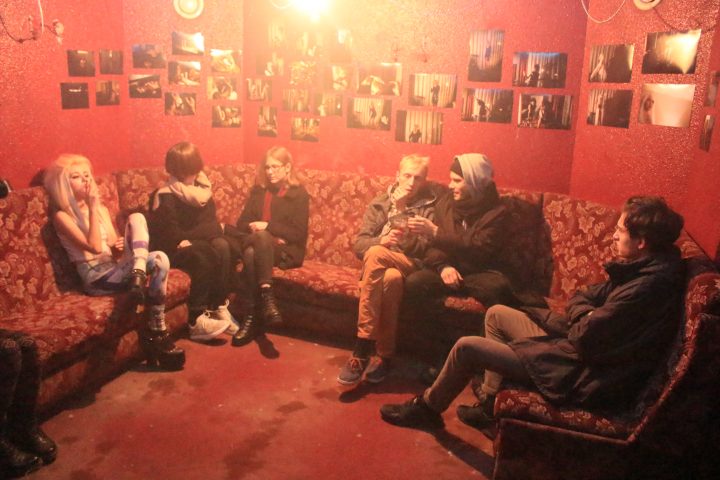 Yeltsin’s Painting for the Hotel leverages the privileged proximity of the top floor to the sky. As part of a 2017 program supported by the British Council, eight artists went where the sun doesn’t shine. That is, they went to the Red Room – a once legendary, now insolvent bar beneath the Intourist-Zakarpattya Hotel lobby. The group’s exhibition realized therein, which addressed themes of deliverance and exchange, vivified the space. The effect was particularly pronounced in Olga Berezyuk’s contribution, Carriage of The Time, a series of dream-inspired paintings, drawings, and comics. The Belarusian’s landscapes are filled with flora and fauna whose color and scale lean towards the fantastical. The comics revolve around the figure of a triangular lady and her scruffy dog. The duo is seen in the midst of myriad escapades and is often pictured in flight. Its descent into the Red Room has not hindered its ascent. The exhibition documentation implies that the dreams are more complete than the Red Room itself, whose lit walls appear wet – the cold sweat upon waking from hibernation.

As suggested, the principal ‘product’ of residencies at Sorry, No Rooms Available has heretofore been exhibitions. Depending on the profile of the artist, these exhibitions average an attendance in the range of thirty to seventy persons. Owing to a dearth of art critics in Uzhhorod the shows are infrequently reported on and, subsequently, are primarily preserved for posterity in the memories of those present.

The emphasis on exhibitions underscores the fact that Sorry, No Rooms Available revolves around how the artist identifies the relationship of their practice to the hotel and its surroundings. As Katerina Tykhonenko, a Kyiv-based curator hailing from Uzhhorod, rightly suggests, this approach does not substantively address the city’s overall isolation or the causes, complacencies, and capacities of its institutions. At the same time, Tykhonenko underscores how consequential Ryaska’s initiative is and can be, noting it as a “powerful starting point” that has the potential to have a transformative effect beyond the bounds of the contemporary art community.

Despite being figuratively fully booked, Sorry, No Rooms Available remains in the “what if” working mode. What if we tried this? What if we partnered with them? What if we snuck out through the back? What if we made ourselves the managers?

No agenda is absolute, and no line of enquiry has been exhausted, so every action is consequential.

Alex Fisher is a writer and curator from the U.S., based alternately in Kyiv, Ukraine and Knislinge, Sweden. He spent the past year researching Ukrainian contemporary art as a Fulbright scholar affiliated with Mystetskyi Arsenal and IZOLYATSIA. 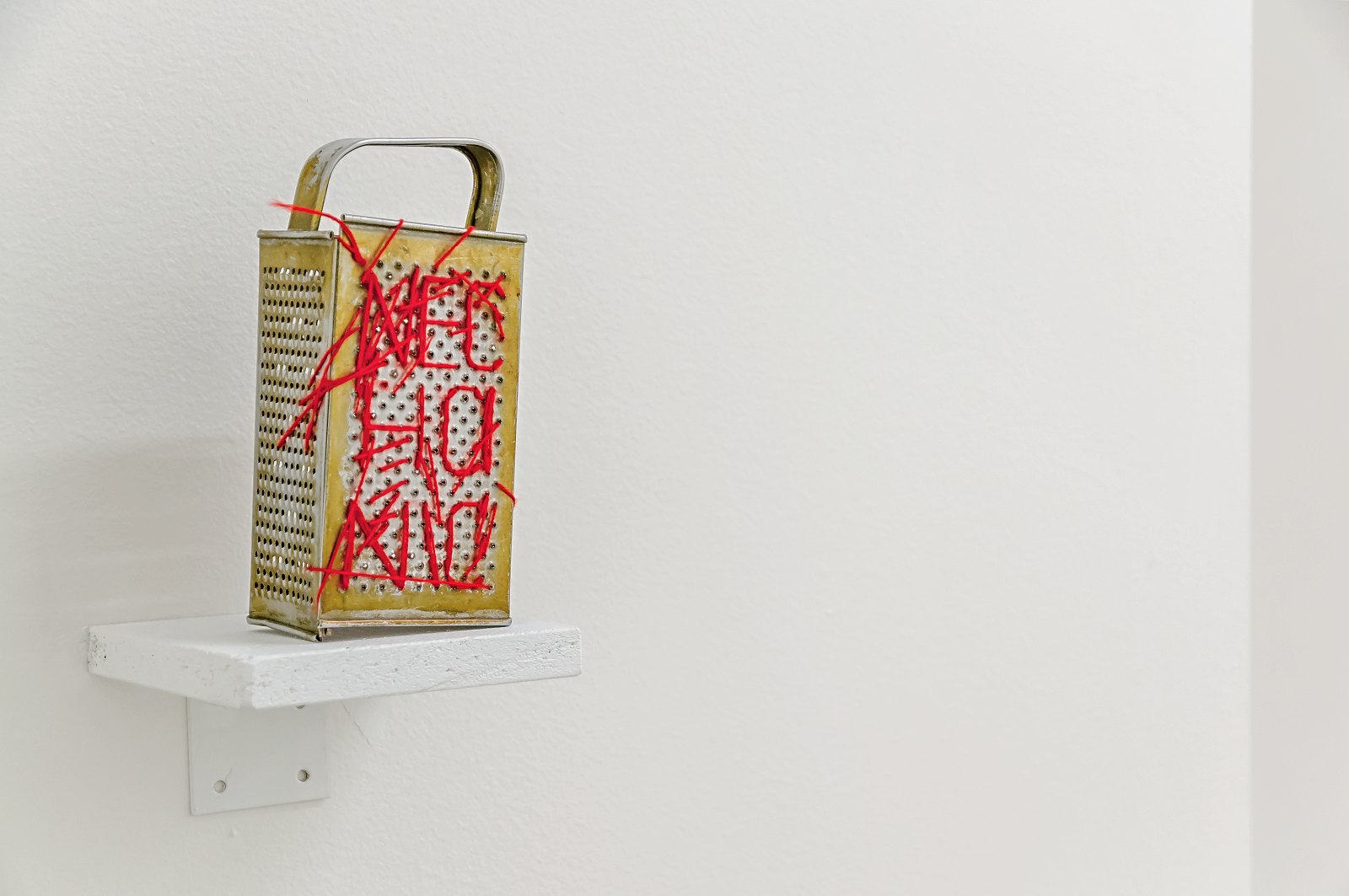