Stano Masár (born 1971 in Bratislava) is a playful post-conceptual artist employing strategies of manipulation, transformation, interpretation and context sensitive and site specific installations.Hehasmadehis mark in the annals of art history with his original interpretation of historical and contemporary international and domestic masterpieces, which he has analytically transformed into the simplified language of pictograms (Michelangelo, Leonardo da Vinci, Damien Hirst, Pipilotti Rist, Maurizio Cattelan and others). He has confidently pushed the boundaries between art and design by applying pictograms to pavement, a children’s puzzle, a chess table, computer table and the like. In the Just series he omitted significanta spects from famous artworks. Just Jesus is Leonardo’s Last Supper in which Jesus is left sitting at the table by himself. Cattelan’s Pope disappears from the red carpet along with the meteor. Just Women is a rendition of Manet’s Luncheon on the Grass where only the women are left.
For the Czechoslovak pavilion of the Venice Biennale he prepared a project with Tomáš Vaněk titled Lobby which was never realized. The pavilion was to have been transformed into a fictitiouslobby of a non-existent art institution (museum, gallery) which would have met all the non-artistic needs of the art-going public (refreshments, book corner, kid’s corner, reception, cloakroom, catalog stand).
In the exhibition titled The Unbearable Banality of Being he disturbed the fragile formal nature of everyday items, prompting an escape from the quotidian of existence. A melting radiator, a hanging water pipe, paint dripping from the ceiling, a clock where the numbers and hands have fallen off. A separate category of Masár’s work consists of altered doors, tables, chairs, radiators, electrical plugs… Stano Masár has also created an empty waiting room titled Waiting for Artist’s Idea, or circulated an unpainted canvas through a gallery. His elevators have regular doors, trafficlightsarealtered, the doors of a Hungarian bus have been installed in a synagogue, or curators Helena Kontova and Giancarlo Politi have been turned into Barbie and Ken dolls.
Stano Masár has also made significant contributions to the field of graphic design. He is the author of design manuals for several Bratislava galleries, a series of artist catalogs, as well as the art magazine Jazdec. 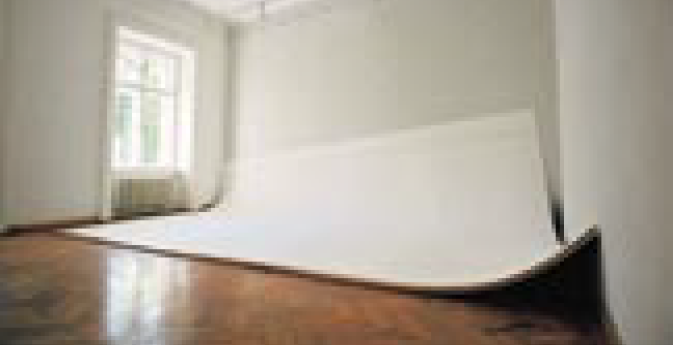