Vasil Artamonov (born 1980 in Moscow) and Alexey Klyuykov (born 1983 in Vladimir) are two of a kind. The Russian-born artists, active on the Czech art scene, have worked as a duo since 2005. Their work reflects a common experience of two post-totalitarian countries as well as an absurd humor contrasting dry intellectualism. Utopian visions of the previous century come together with a reworking of the visuality of modern art movements such as cubism, futurism, suprematism or even socialist realism. Their installations usually combine found manipulated objects or ready-mades with videos, paintings, collages or sculptures made to appear older than they are. The process of history is reversed, without respect to its chronology or intellectual consistency. The political assumptions as well as artistic achievements of the past result in a contemporary surreal vision of two young artists, who have something substantial to say but they are not quite sure what exactly that is. Their work evokes a mixture of confusion, nostalgia for the past and play with the present, childlike and revolting at the same time.
The shared sense of black humor and refusal of the values of consumer society result in many actions. The way we helped (2006) is an early project, anticipating the phenomenon of guerilla gardening. In the same year Artamonov and Klyuykov were calling the spirit of Kazimir Malevich or Sowing Seeds on a golf course, pointing out the nonsense of our actions within a given context. The nostalgia for futurism is shown in a 2007 video, representing a weaned wagon with an inscription “Time and Space died yesterday”. Now we are living in the absolute, since we already have created an eternal, omnipresent speed.“ The old gives us the heat, as a recent installation of rusted radiators glowing from the gallery wall might suggest. But we are now building yet another system, replacing nuclear for the information power. We have too much past to create something new and yet we keep fulfilling the sci-fi visions of our predecessors.Though nothing prevents us from having a little fun with it. 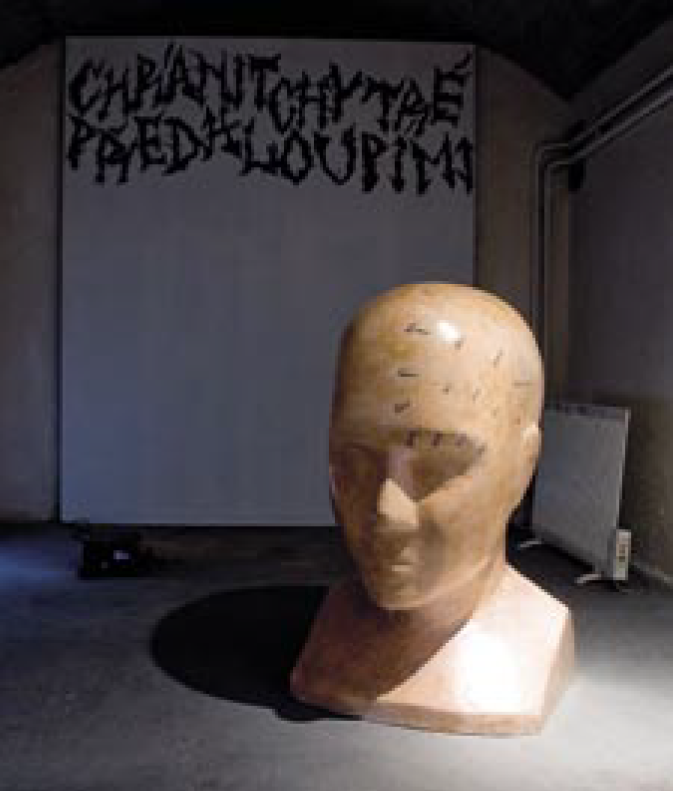